I recently had the great pleasure of spending a couple of hours chatting over coffee in San Diego with Harry Markowitz, one of the biggest names in academic finance. He had so much to say that I’ve divided the interview into two parts, of which this is the second. In it, Markowitz answers those who argue that Modern Portfolio Theory is no longer relevant; he gives his opinion on what has become one of the longest bull markets in stock market history and explains why he thinks we’re seeing an asset bubble; and finally, he reflects on his life and what he has achieved.

RP: Some people say the global financial crisis of 2007-2009 disproved Modern Portfolio Theory, in that we saw widespread falls in value across different sectors, regions and asset classes. What do you say to that?

HM: No, no. It proved it. The chief mistake of the small investor is they buy when the market goes up, on the assumption that it’s going to go up further, and they sell when the market goes down, on the assumption that the market is going to go down further. But a professional investor will rebalance. If your adviser says, given your personality and so on, you should have a 60:40 mix of stocks and bonds, and then the market goes up, you don’t have a 60:40 mix; you have a 70:30 mix, and you’ve got to sell. And if the market goes down, you’ve got a 50:50 mix, and you’ve got to buy. There are these poor individuals who are buying at the top and selling at the bottom; and the institutional investor is on the other side. And everything the small investor loses the big investor gains. Rebalancing was a by-product of Portfolio Theory.

RP: You must be asked all the time how best to invest. What do you say when people ask you that?

HM: Yes, I get asked all the time. Let me tell you about two extreme clients. One is Guided Choice, a 401(k) advisory service. That’s where I am every Thursday. It’s all automated and computerised. Our largest client is McDonalds, the hamburger outfit, and we have thousands of clients through our strategic relationship with Charles Schwab. We do top-down and forward-looking analysis. That’s one extreme.

The other extreme is Monica at Elijah’s, my local deli. She asks me how to invest and I say, take half your money and put it in a savings account and take the other half and put it in a well-diversified equity portfolio with Vanguard and leave it. Those are my two pieces of advice. With Monica I gave her the advice for nothing, but I get great service, and the other one I charge for.

RP: What is the single biggest mistake that investors typically make?

HM: If gold is going up, there are people who are rushing in to buy gold. If the market is going down, they sell. There are two kinds of people — ill-advised and well-advised. The ill-advised watch Jim Cramer yell at them on CNBC. I may be enthusiastic but I don’t yell advice. The smart investor just buys and holds a well-diversified portfolio, using index funds. 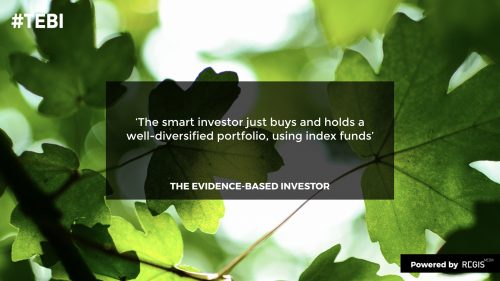 RP: Generally speaking, how diversified should investors be?

HM: Diversification means different things to different people. Let’s suppose there are only two asset classes in the world — stocks and bonds. If you are a 21-year-old, without a great deal of capital, you can go 100% into stocks. If you’re getting on in years, you should put more more into bonds. But you’re not going to consume everything at age 65, you’re probably going to live beyond that, so don’t go 100% into bonds.

Your equity portfolio should be diversified, and that’s not just having a lot of stocks; it means big-cap, small-cap, value, growth, foreign and domestic. Your portfolio should also be efficient. It’s not important to be exactly on the Efficient Frontier. But if you’re not somewhere near it then, the first time there’s a crisis, like in 2000 or 2008, you’ve got a problem.

RP: We’ve had a very long bull market. What do you make of that?

HM: Well, the bull was lazy for a few years. It was a slow recovery. That’s the same reason why the depression lasted for so long. If you tax 90% of people’s income, they’re not going to have much incentive. Capitalism has to do with profit. Roosevelt was rich, so he didn’t tax wealth; he taxed income.

Take a plot of the Obama recovery versus the Reagan-Thatcher recovery. They put on the brakes to fight inflation, and then they said, we’ve got inflation under control, let’s start removing regulations, so the economy popped up like a cork. If Obama had followed Reagan’s policy, the same would have happened.

There are two ways to recover — Keynes and Friedman. Keynes says stimulate; Friedman says incentivise. We have been stimulating like mad. There’s an expression, you can pull a string but you can’t push it. You can stimulate all you want, but you can’t buy a factory instantly. You can borrow money as soon as things start to look good. But until people can see that they can make money, make a profit, by building factories and hiring workers, then all this cash goes into liquid assets. It can go into the stock market or the real estate market. So you stimulate, and what you have is an asset bubble, and some day that asset bubble is going to burst.

We had an asset bubble all the way through Obama; in fact they first started to stimulate under Bush. People are now saying, regulations are coming off, maybe taxes won’t be increased, and so the market has gone up. That’s a bubble, and it’ll burst some day.

RP: So is the bubble likely to burst soon?

HM: Who knows? It’s going to happen, but I don’t know when. Two or three years maybe.

Let me tell you what your readers what they need to read so they understand exactly what’s going on. There was a book written in the 1800s by Charles Mackay called Extraordinary Popular Delusions and the Madness of Crowds. The first 100 pages of the book talks about the South Sea Bubble and Tulipmania. Bernard Baruch read that book in 1927 or 1928, and he decided there was a bubble and he sold. He shorted the market and he became very rich. 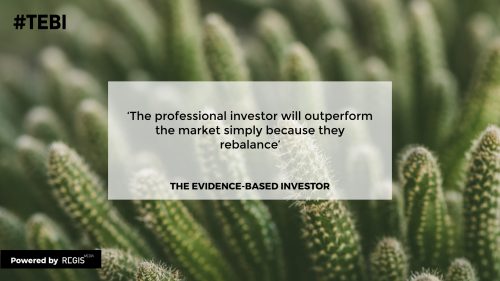 RP: If you were a financial adviser today, then, what would you be using your clients to do?

RP: What do you say to those, including Jack Bogle, who aren’t as keen on rebalancing as you are?

HM: I’m a fan of Jack Bogle, and he may be a fan of Harry Markowitz for all I know, but I would ask him the following question. Suppose you’re advising a client, and suppose the client should have a 60:40 mix of stocks and bonds. Suppose, ten years later, they’re in a 90:10 mix because they didn’t rebalance. Is that the right answer? I’m sure Bogle wouldn’t argue with that.

RP: Harry, you’re still writing and consulting. You have a four-office suite with two secretaries. Most people in your position would say, I’m 90 years old, I’ve won the Nobel Prize, and I’m going to put my feet up. Why not you?

HM: Because I’m having fun! If I were drinking coffee at the beach on a bench, and I hadn’t done anything since 1959, would you come from England to interview me? No. And if you did, I wouldn’t have any stories to tell. When I die, I will be in the midst of a project.

The way you keep alive is, firstly, having good genes. You need luck. But luck is not enough. At one point I had high cholesterol, and my doctor put me on medicine, which brought it down. But my wife said we should be able to bring it down through diet. She took a course on spa cooking, and she feeds me vegetables, fruits and fish. I still live on that, except if you can’t have a good piece of beef fat around a steak or prime rib once in a while, you can forget it!

RP: You’ve certainly lived a life worth living. You must feel very satisfied at everything that Harry Markowitz achieved?

HM: I like to read philosophy. The greatest philosopher ever, in my mind, is not Plato, but Aristotle. He spoke of eudaimonia, which means living a good life, so that people think well of you after you are dead. Think of Charles Dickens and the Scrooge tale. Scrooge sees the Ghost of Christmas Future, and what really gets to him is that no one attended his funeral. And he says, that’s enough, I’ve got to be a good guy, I’ve got to help Tiny Tim. He went from non-eudaimonia to eudaimonia. I think I’ve lived a good life.

If you missed the first part of this interview with Harry Markowitz, you’ll find it here:

Harry Markowitz: Why I’m writing a new book at 90

Economic commentators are increasingly worried about inflation. In the UK, for example, inflation hit 10.1% in...