It’s a question I ask myself all the time: Why do most investors and even financial advisers continue to favour actively managed funds in the face of overwhelming evidence that passive funds deliver better outcomes?

A new paper entitled How Active Management Survives suggests it may be down to something called the conjunction fallacy. In a nutshell, the paper suggests, people believe, irrationally, that good returns are more likely if investment is accompanied by hard work. What makes the notion so plausible is that in most areas of life hard work leads to greater success than laziness. But there are other examples of how doing nothing is actually better for us — fasting and meditation, for example.

The paper is jointly authored by JB Heaton, a Chicago-based legal consultant specialising in the financial industry, and Ginger Pennington, Assistant Professor at the Harvey Kapnick Center for Business Institutions and the Department of Psychology at Northwestern University.

In this interview, JB Heaton explains their findings in more detail and discusses what the implications are for financial advisers and regulators.

RP: JB, this isn’t means the first paper to offer an explanation as to why active management remains so popular despite the overwhelming evidence that people are better off investing passively. Briefly, what have other academics said?

JBH: Most of the academic work has been from the “rational” school of thought. In a 1996 article I remember from my graduate school days, Martin Gruber attempted to characterise investment in actively managed mutual funds as rational on the assumption that sophisticated investors could detect management ability. That doesn’t seem too plausible. There have been some “how many angels can you fit on the the head of a pin” ultra-unrealistic models that try to deliver investment in underperforming active funds as a rational response to various things, and there has been some useful work by my dissertation chairman Rob Vishny and his colleagues positing that investors have a demand for trusted advisers to make them feel better about investing. In my view, none of these papers has provided a satisfactory explanation — much less evidence — on why there is such a persistent draw to active funds, though Vishny’s work comes closest. Interestingly, he made his fortune founding a large money management firm, LSV Asset Management (he’s the V) and has spent time with investors.

RP: How did your interest in this subject come about? And what were you trying to achieve with this paper?

JBH: I have long been interested in the problem of active management. Several of my Chicago Ph.D. classmates went into active management and I could never get myself to believe I could add much value and so I went another way. In the last few years, I got interested again in this question and recruited one of my dissertation advisors and our co-author, Jan Hendrik Witte, an Oxford-trained mathematician, to study the question Why Indexing Works where we helped advance the argument that skewness in returns means that it is very difficult for active managers to beat a passive index like the S&P500.

I continue to be puzzled by the fact that supposedly very sophisticated investors invest with active managers, especially hedge funds, who consistently underperform my children’s 529 plans and my own assets in index funds. I pay four basis points to Vanguard and a former partner of mine invested with Citadel pays huge fees and 20% of upside. And the index has beaten Citadel in 2016 and 2017 and didn’t lose nearly 60% in 2008 like Citadel did.

With this paper, I was trying to understand whether an explanation as simple as belief in the work ethic could explain the aversion that some people have to passive investing. The idea of the work ethic came first and then I thought, “Oh, this could be a conjunction fallacy”. Then we tested it and the results were quite strong.

RP: Essentially what you’re saying in your paper is that, because using active funds is an irrational choice, we should stop trying to come up with rational explanations for it. We should focus on psychological behaviour instead. Is that right?

JBH: That’s right. Of course, we know that there has to be some active management to keep prices close to efficient. This is the classic argument of Grossman and Stiglitz: there has to be enough mispricing to draw active investors into the market to correct mispricing. But you don’t need many of those to keep the marginal price at correct levels. Certainly I suspect you need orders of magnitude less than we see. And when you look at active managers who perform very badly but people stick with them (my favourite current example is David Einhorn at Greenlight) I don’t see how a rational explanation is going to do it. Remember that active investing is a zero-sum game.

Of course, we also know that there is an entire industry making money off these investors. It was probably not the best personal wealth-maximisation move not to go into money management. But lots of people make lots of money selling products that are bad for people. I think of the big asset management firms and hedge funds more like tobacco companies or soft drink manufacturers. To me, Ken Griffin (founder of Citadel, and a great benefactor in Chicago) is more like a tobacco baron than a good money manager. The question is, as with smoking and drinking Pepsi, why do people do it when they should know it’s quite bad for you? 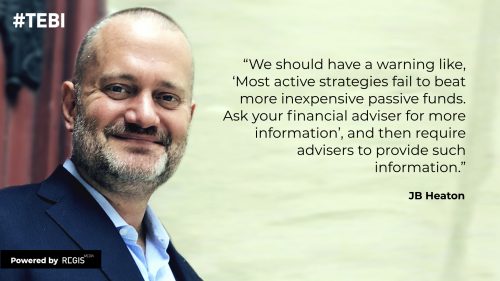 RP: As you mentioned, your thesis revolves around the conjunction fallacy. What exactly is that? And what’s the “Linda problem”?

That’s the conjunction fallacy: believing that the conjunction or joint event is more probable than one event separately. In probability terms P(A) > (or at most =) P(A,B) = P(B|A)P(A). “A” in my example is  “I have sushi today” and “B” is “I am in San Francisco today.” Since P(“I am in San Francisco today” given that “I have sushi today”) is a probability and must be less than or equal to 1, the joint event cannot be more probable than the single event A.

RP: One of the reasons you suggest why people put their faith in active management is the illusion of control. What exactly do you mean?

JBH: People tend to think that they can and do control more than in fact they control. When you put money into a passive fund, you more or less have to recognise that your returns are a function of how these index components do. With active management, it’s easy to believe that by working hard to identify winners and losers, you can do better. But the odds are stacked heavily against you, partly for the reasons we identify in the Why Indexing Works paper.

RP: You also refer in the paper to the “just world” phenomenon. What is that, and why, in your view, does it help to explain the popularity of active management?

JBH: This is a human tendency to believe that the results we see are a function of people’s actions. Think of it as the karma effect. As we point out, it tends to be a negative phenomenon, where we want to blame the victim of some tragedy as having deserved it. Think of how many times you hear a person ask about a lung cancer victim, “Did she smoke?” But there is a positive phenomenon as well, where we think that, for example, people are successful because they worked hard. But of course, that’s not always a reliable indicator either. In our work, the idea is that people assume we live in a world where hard work on investment strategy would pay off in better returns than doing nothing. But like the examples we give of medical fasting and meditation, there are times when doing less is the dominant strategy.

RP: As part of this study, you conducted an online survey with a sample of 1,001 people. What did you ask them and what were the findings?

Despite trying really hard to make our conjunction fallacy hard to fall for, about 30% fell for it, were more likely to do so if they believed hard work paid off, and didn’t do much better if they were familiar with stock investing.

RP: Do you think the big active fund managers an their marketing departments are aware of these biases?

JBH: I don’t know. I think our view of the problem in this framework is pretty novel. But certainly a lot of marketing by active funds stresses all the research and work they put into their products. They stress that, understandably, far more than performance. So at least at a subconscious level, I think the marketing people get it.

RP: What do you think the implications of your findings are for those of us who are trying to educate investors and help them to achieve better outcomes? What do they mean for financial advisers, for instance, and also for regulators?

JBH: For financial advisers, I think it is a matter of using research like this and Why Indexing Works to show clients that the adviser is adding value — a lot of value — by directing the clients into passive funds, and that clients shouldn’t be fooled by the promises of active management. This is a huge problem for financial advisers: many if not most know their clients are best served by inexpensive passive products but it’s hard to persuade clients that advice is more valuable than stock picking, etc. And there’s still a rôle for some additional actions around the edges by financial advisers. For example, protection on the S&P500 has been remarkably cheap. Putting a client in the S&P500 with a put that kicks in at say a 5% or 10% loss would do better than most any active strategy and provide downside protection at a great cost, at least at current volatility prices.

As for regulators, this is a tough one. I just sent a comment letter the US Securities and Exchange Commission about our research. The financial industry is very powerful and the revolving door at the SEC is a huge problem. I know that the SEC economists understand all this; the acting chief economist is a Chicago classmate. What we really need is an evidence-based warning on financial advertisements about the superiority of most passive strategies.

We all roll our eyes at that “past performance is not indicative of future performance” warning because it actually sounds like an endorsement of the past and a suggestion that the future really will be bright. We should have something like, “Most active equity strategies fail to beat more inexpensive passive funds. Ask your financial adviser for more information” and then require advisers and broker-dealers to provide such information.

I’m not holding my breath, since it’s actually controversial in the US to suggest that sellers of financial products should act in the best interests of their clients. That’s surprising given the way most investors think of financial firms, but not at all surprising if you think of them more like cigarette manufacturers or casino operators. We don’t expect them to act in their clients’ interests.

You can download JB Heaton and Ginger Pennington’s paper here: