We all like to get away from work at weekends, but some of us have funny ways of doing it. Me, I’m a sports fan. Barring Formula 1 or horse racing, I’ll watch pretty much anything. But my particular passions are Aston Villa Football Club and the England cricket team.

The drawback with my sports addiction is that, although it takes my mind off work, it doesn’t exactly make me happy. This weekend was a classic example.

It was a miserable early summer for Villa fans. It looked for a while as though we would lose our best players and perhaps even go out of business. But things just recently have been looking up. The club was bought six weeks ago by Wes Edens, the billionaire owner of the Milwaukee Bucks and an even wealthier Egyptian businessman by the name of Nassef Sawiris. That was followed by some stellar signings in the transfer window.

It was, therefore, with a spring in our step that my Villa-obsessed son and I arrived at Sheffield United on Saturday — only to find ourselves three-nil down at half-time. Believe me, it’s a long way home when you lose 4-1. 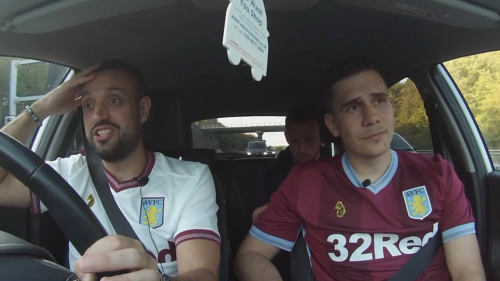 It was up to England’s cricketers, then, to cheer me up on Sunday, and they duly kept their side of the bargain, sealing victory in the Fourth Test against India at Southampton, and the series with it.

Why, then, am I still in such a bad mood about Saturday? The problem is that defeats cause us fans more pain than victories bring comfort. Indeed the evidence is more than anecdotal. Earlier this year, researchers at the University of Sussex analysed three million responses from 32,000 people on a smartphone app called Mappiness, which periodically asks users how they are feeling, what they are doing, where they are and who they are with.

Interestingly, research into the behaviour of investors has yielded very similar results. In a well-known study published in 1992, the psychologists Amos Tversky and Daniel Kahneman found that we feel around twice the emotion over a loss than we do over a gain.

Behavioural scientists call this particular bias, by which losses loom larger than gains, as loss aversion. Why it should have such a hold over us is open to debate. It partly reflects the critical role of negative emotions; loss aversion is essentially an expression of fear.

The concept was introduced in a ground-breaking paper, again by Tversky and Kahneman, in 1979. In fact it took many years for their thesis to be generally accepted, and even now, there are those who say its importance has been exaggerated. A recent paper in the Journal of Consumer Psychology for instance, even argued that loss aversion is “essentially a fallacy”.

That, as Barry Ritholtz argued in an opinion piece for Bloomberg last month, is an extraordinary claim without the extraordinary evidence to back it up. “For many good reasons,” says Ritholtz, “loss aversion has become accepted wisdom on how people make decisions under conditions of uncertainty. I suspect it will be a long time before that explanation is overthrown.”

Loss aversion is the subject of the third video in Regis Media’s six-part documentary series for RockWealth on behavioural finance, Your Own Worst Enemy. In it, Morningstar’s resident behaviour finance expert Sarah Newcomb gives her own definition of it.

We also look at ways to combat loss aversion, with the help of James Norton from Vanguard, Gerard O’Reilly from Dimensional Fund Advisors and the hugely articulate Greg Davies from Oxford Risk. For Greg, the secret is is to “look at the big picture first and then the details”.

So, to all my fellow sports fans feeling a little bruised after the weekend, don’t get too hung up on one result. As any Birmingham City fan will tell you, things could be a whole lot worse.

If you missed the first two videos in the series, on optimism bias and overconfidence, you can catch up here:

Your Own Worst Enemy: Part 1

Your Own Worst Enemy: Part 2

It might seem an obvious thing to say, but human beings don’t like losing money. We really don’t.

Behavioural scientists refer to this tendency as loss aversion.

Sarah Newcomb from Morningstar says: “Loss aversion is the fact that, given a loss and a gain of equal value, the loss hurts more to us than the gain feels good.

“Some people are the other way around — those are risk seekers — but most of us are loss-averse, which generally means we don’t want to put our money at risk. And that really hurts us when it comes to investment, because, in order to outpace inflation, which is the whole point of investing in the first place, we have to take on some risk. Otherwise we won’t get the return that we need in order to outpace inflation.”

Investing is inherently risky — and you shouldn’t take more risk than you’re able to, than you need to or you’re comfortable with.

But most people are programmed to take less risk than is actually sensible.

James Norton from Vanguard Asset Management says: “A simple example is that when a group of people were given a bet, with the chance of winning £2,500 against the possible loss of £1,000, they needed a better than 50:50 chance to take that bet on.

“Logically that doesn’t quite make sense. You’ve got a 50:50 chance on the coin toss, and you’ve got the potential of a much larger upside than the downside. So it should be a fairly simple decision.”

Ironically, one of the biggest risks investors take is not taking enough risk. They spend too long with too much of their wealth sitting in cash.

Greg Davies from Oxford Risk says: “If you think about a moderate-risk investor, who would otherwise be invested in a nicely diversified multi-asset class portfolio — equities, bonds, cash, a bit of everything in there, a moderate risk portfolio over the long term — you should expect to get returns in excess of cash of about 4.5 to 5% from that portfolio.

“So if you are sitting with portions of your wealth doing nothing for long periods of time, you’re effectively buying yourself the ability to get to sleep at night at the cost of 4.5% per year. Now that is an extremely expensive way of buying emotional comfort for yourself.”

Another example of loss aversion is the way that many investors take fright when markets fall. That’s when our survival instinct kicks in and we instinctively want to protect our money.

James Norton says: “Say we’ve got a portfolio, and it falls by 10% or 20%, or whatever the number is. And we think it’s going to fall more, it’s going to keep on falling, so the instinct is to sell up, hold it in cash. Then you say, Don’t worry, I’ll get back into the market when things are better. It’s the wrong thing to do.

“Timing the markets is incredibly difficult. And therefore, selling when the market has started falling is a dangerous strategy, because the chances are that by the time you’ve got that optimistic feeling back, the markets will have recovered and you’ll be buying in at a higher price to where you sold out.”

So, how do investors combat loss aversion?

First things first, they need to accept that for all equity investors, market volatility comes with the territory.

“Set an asset allocation that you can live with, that has a good balance between stocks and bonds, so that you can ride out those tough times, and stay disciplined during those good times, and then stop worrying.

“Markets are good at pricing information, they’re good at setting themselves up to have positive expected returns, but things that are unexpected always happen, and that causes markets to go up and go down.”

Here’s another simple tip for those prone to loss aversion — don’t look at your portfolio too often. Once a year is perfectly sufficient.

So, accept volatility as perfectly normal, don’t keep checking your portfolio, and focus on the big picture.

Over the long term, patient investors have tended to earn handsome rewards for the risk they’ve taken.