Matthew was for many years my own adviser, until he left the profession, fed up largely with its resistance to change. He’s since been on a similar journey to me, discovering the evidence about how investing really works, as opposed to the way the fund industry and most of the financial media want us to think it works.

Why, I asked him, are so many advisers stuck in the past? Why do they continue to put all the emphasis on the investment piece when it’s becoming increasingly commoditised? And why do they still recommend products and strategies that will almost certainly leave their clients worse off in retirement?

The problem, Matthew said, is that most advisers are pretty well off. Even though commissions are now banned in Britain, firms have done very well out of the product-based business model. They have a regular, guaranteed income, and they often neither need nor want any more clients. What incentive is there to change course now?

Then, last night, another adviser, whose identity I’ll protect, made precisely the same point. We were talking over a drink at the end of BACK2Y, a conference for disruptive advice firms, here in Birmingham. 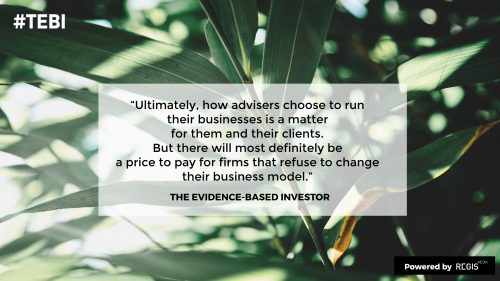 Although he works for an advice firm built on the old model, this particular adviser has come to realise that it’s not sustainable. Three years ago he discovered life planning and cash flow modeling. While all his colleagues continue to do things the same old way, he’s gone in a totally different direction, putting life planning ahead of financial planning, and financial planning ahead of the investment piece. Instead of the high-fee active funds favoured by his workmates, he uses low-cost index funds.

He tried to persuade his fellow advisers to go the same way, but he couldn’t. It’s a successful business, he explained, and the whole team is well remunerated. As Upton Sinclair once said, “it’s difficult to get a man to understand something when his salary depends on his not understanding it.”

This adviser has therefore taken the brave decision to leave the business and set up on his own. His clients, who love his new approach, are going with him.

Thankfully, more and more advisers are taking the same path. BACK2Y was sold out, with advisers coming from all over Europe. By coincidence, a very similar type of conference, Disrupt Advice 2017, has been held in New York City over the last two days; again, it’s been a huge success.

Ultimately, how advisers choose to run their businesses is a matter for them and their clients (and perhaps, one day, their clients’ lawyers). But there will most definitely be a price to pay for firms that refuse to change their business model.

Simply put, old-style advice firms will gradually die as their clients die. OK, it may take ten years or more before they start seeing significant dents in their income, but it will happen. And, by then, a new generation of advice businesses will have sprung up — client-focussed and evidence-based, with a value proposition that blows the traditional one out of the water.

Tens of thousands of advice firms around the world are dying a lingering death. By the time they realise, it’ll be too late. They won’t stand a chance.