I recently had the privilege of spending an hour and a half with one of the giants of financial economics. How strange, I thought, as I sat with Harry Markowitz in his local coffee and bagel shop in San Diego, to see customers shuffling past for their daily caffeine fix completely oblivious to the genius in their midst.

Now aged 90, the Nobel Laureate and father of Modern Portfolio Theory is working on another magnum opus — a four-volume work which effectively builds on his famous 1959 book, Portfolio Selection.

Why, then, is still he hard at work when most of his contemporaries retired a quarter of a century ago? Markowitz explains all in the first part of this fascinating two-part interview.

RP: Harry, thank you very much for finding time to speak to you over a coffee.

HM: It’s a pleasure. My motto is, it’s OK, but first coffee!

RP: You’re often referred to as one of the fathers of modern finance. Is that a description you feel comfortable with?

HM: Something that is not widely not known is that my field is not finance. It’s closer to the truth to say my field is operations research, which applies mathematical, statistical and computer techniques to practical problems. My first job was at the Rand Corporation, which did operations research. Modern Portfolio Theory is just an application of standard computer techniques. But, more deeply, I’m really a philosopher.

RP: OK, I’d like to explore your interest in philosophy later, but first, tell me about your time in high school.

HM: When I was in high school I was a nerd — before the girls found out that nerds could make lots of money! I had one nerdy friend and a high school girlfriend. She was the prettiest girl in the school and she became my first wife. We had a few problems but we had a couple of wonderful children. My other nerdy friend became a professor of chemistry and retired at 65 like any sane person would do. I’m still working 90! 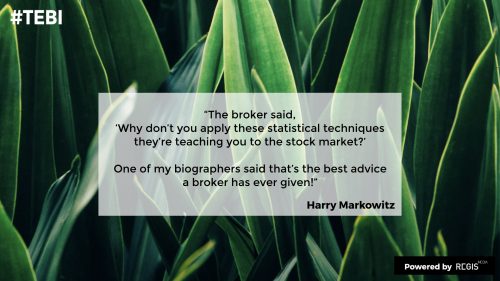 RP: So you went to the University of Chicago, and it was there that you wrote your famous paper on diversification in 1952. How did that come about?

HM: I was a PhD candidate, and I was at the stage where I had to pick a dissertation topic. So I went to my supervisor, Jacob Marschak. He was busy so I waited in the ante-room. There was another guy waiting for him who turned out to be a broker. We talked, and the broker said, why don’t you apply these statistical techniques they’re teaching you to the stock market? One of my biographers said that’s the best advice a broker has ever given!

So I said to Marschak, the guy out there thinks I should apply these techniques to the stock market. Marschak thought it was a good idea, but he didn’t know the literature, so he sent me to Professor Ketchum, who was the Dean of the Business School. Professor Ketchum gave me a reading list, which included Graham and Dodd, and John Burr Williams’ The Theory of Investment Value, which was the financial theory of the day.

So I read Williams. He says that the value of a stock should be, or is, the present value of its future dividends. So I thought, dividends are uncertain, he probably means the expected value. Later in the book, he does say that if you’re uncertain about a value, you should use the mean, because with sufficient diversification, all the uncertainty goes away and you will get the mean. Now, if you have uncorrelated risks, that is true. Anyway, that’s how it happened.

RP: It seems odd, given how generally accepted the importance of diversification is today, that it wasn’t a more popular view back then.

HM: Well, the Bible knew about it! The Bible said you should invest in three asset classes. Shakespeare knew about it too. In The Merchant of Venice, Antonio is asked, why are you so glum? Is your business going badly? And he replies, “Believe me, no. I thank my fortune for it — My ventures are not in one bottom trusted, Nor to one place, nor is my whole estate, Upon the fortune of this present year.” So he knew about diversification.

RP: You wrote your book Portfolio Selection in 1959, but you didn’t receive the Nobel Prize until 1990. Why was there such a long delay?

HM: That’s easy. By the way, Nobel did not give a prize in economics. The prize for economics is given by a Swedish bank. It was in the early 1950s that the prizes first started, and they had to give it to real economists, to begin with. The first prize went to a couple of econometricians, and then Samuelson and Friedman won it.

RP: So you weren’t disappointed that you had to wait so long?

HM: No, but what did put my nose out of joint was that James Tobin got it before I did. I thought maybe I was going to get it that year, 1981. I was at a meeting in Silver Spring, Maryland. I had given my paper the day before. And I heard that Tobin had got it for his work on portfolio theory, which of course followed mine. There was also an award given for linear programming, and George Dantzig didn’t get that either. It was given to a Russian no one has ever heard of, and it was a scandal. I told my wife Barbara I didn’t want to go to the meeting, and we went for a long drive in the country. We found a big five-and-ten-cent store in the middle of a little town and we had an ice cream cone. I said OK, I’m ready to rejoin the real world. And I didn’t think about it again until I got a call in Japan from a television station saying, you’ve just won the Nobel Prize. 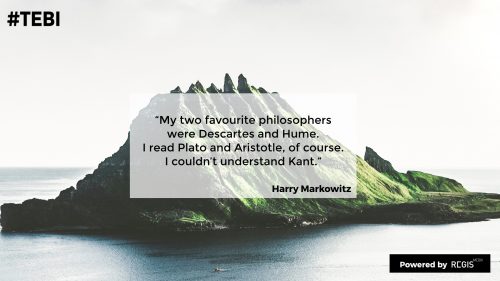 RP: That was 1990. How do you feel about that achievement now?

HM: I’m still surprised. It was not my intention to become a great economist and have a favourable impact on the lives of hundreds of millions of people. Like I said, I was a philosopher.

RP: So who are your favourite philosophers?

HM: My two favourite philosophers were Descartes and Hume. I read Plato and Aristotle, of course. I couldn’t understand Kant.

RP: Indeed Descartes and Hume each receive a mention in the three-volume book that you’re currently working on, which is a follow-up to your 1959 book. I’ll let you explain the connection!

Well, the fundamental assumptions I made in my 1959 book are at the back of the book. Why did it put them there? Because if I had started with an axiomatic treatment of the theory of rational decision-making under risk and uncertainty, nobody would have bought the book.

The question I’m trying to answer in my latest book is, does MPT work in a non-normal world?

Descartes says in First Meditation, maybe this is a dream, maybe you’re not here, maybe nobody’s here. And he strips away all the things which can be doubted. Then comes the famous quote, the only thing I know is, I think therefore I am. So, my first blast of scepticism is Descartes. You have to distinguish between fact and hypothesis. There’s tons of big data. They keep having to invent new words for how many bits of data there are. That’s information and, in a sense, information is the same as facts.

So, for example, you pick up the Wall Street Journal and you turn to the earnings page. If you pick out an earning at random, that’s a fact. Well, maybe it’s a misprint. Maybe it’s a lie. Maybe you don’t understand the definition. So, it’s not a fact, it’s a hypothesis. The Wall Street Journal has got thousands of hypotheses every day. So you have to distinguish between big data and the truth.

RP: In a nutshell, then, what does Hume say?

HM: Hume says, OK, if I pick up this empty paper cup and release it, it’ll land on the table. If I do it a thousand times, do I have proof positive that it’ll do the same next time? Sir Isaac Newton’s law of universal gravitation was confirmed zillions of times, and yet it was wrong. Einstein came along and said, if gravity gets strong enough, we find that Newton is only an approximation.

So you have to distinguish between three kinds of proposition — relationships among ideas (which is mathematics or logic), hypotheses about the world, and value judgements.

“It’s not nice to blow ourself up in a crowded place” is a value judgement that you and I and most people would agree to, and yet there are those who think it’s all right as long as you’re killing infidels. And it wasn’t many hundreds of years ago that we burned people at the stake because they didn’t believe exactly what we believed.

Look out for Part 2, in which Harry Markowitz explains why the global market crash of 2008-9 proves, rather than disproves, disprove Modern Portfolio Theory; gives his thoughts on the continues bull run; and assesses what he thinks his legacy will be.