No matter how many times you gently remind people that markets don’t carry on going up indefinitely, it always seems to comes as a shock when volatility suddenly strikes. And so it proved yesterday — Wall Street’s worst trading day in six years.

There’s so much to say about these sorts of events, but nothing, frankly, that wise commentators haven’t said already. If I could point you to just one article about Monday’s events, it would be Jason Zweig‘s piece in the Wall Street Journal about the futility of seeking explanations for what caused the market sell-off, and the way the so-called experts are desperate to give the impression that they saw it coming:

“Market commentators are already arguing that stocks were bound to fall because interest rates are rising and inflation is sure to jump as the economy heats up. But a week or two ago, before stocks stumbled, analysts were saying just as glibly that moderate increases in interest rates and inflation were good for stocks.” 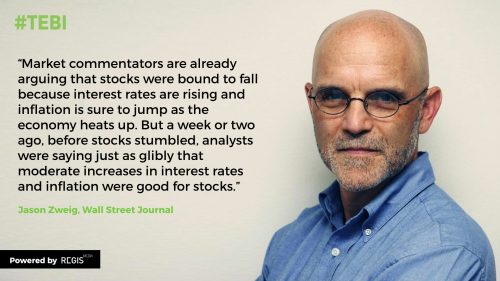 I’ve read other explanations for why the Dow Jones fell by 1200 points, and the S&P 500 by 4.1%, in a day. One fund manager, for instance, suggested the “unusual plunge” in the markets was probably “technically driven” by algorithm or quantitative trades.

It’s human nature to want an explanation for market falls, and for why our investments are worth less today than they were last week. We instinctively want to feel a sense of control. It’s why investors are so susceptible at times likes this to succumb to the temptation to act, or to be taken in by product providers for whom such episodes make perfect selling opportunities. But the truth is that nobody really knows why markets plummeted, or indeed what will happen next. And, for evidence-based investors, it really doesn’t matter.

I interviewed Gerard O’Reilly, the Co-CEO of Dimensional Fund Advisors, the other day and asked him what, if anything, investors should do in response to recent market highs, and his answers seem especially relevant today. The first thing to remember, he said, is that volatility is inevitable:

So, does that mean that, because markets have been on a long bull run, and because they fell so far yesterday, that we’re now entering a bear market? No, it doesn’t. We may be, of course, but the risk of that happening is already baked into prices.

“The question you have to ask yourself is, at any point in time, do you think that investors, in aggregate, set prices to a level such that the expected return is negative? No. Investors don’t sign up for a negative expected return when they’re putting the value of their assets at risk.”

Finally, what should investors do now?

“Set an asset allocation that you can live with, that has a good balance between stocks and bonds, so that you can ride out those tough times, and then stop worrying.”

That’s right, stop worrying. Markets will do what markets will do. Life’s too short to pay them too much attention.