Among the UK financial advice profession, Paul Armson falls into the Marmite category. (For the benefit of readers beyond these shores, Marmite is a sticky, dark brown spread with a  rather distinctive taste, and is best known for its manufacturer’s marketing slogan, “love it or hate it”). I happen to be in the “love” camp, at least when it comes to Paul, but there are many who aren’t.

Paul believes passionately in what he calls lifestyle financial planning. I’ll let him explain in his own words, but, in a nutshell, he’s not a big fan of the fund industry and the way it uses advisers to flog its products. Others say that Paul goes too far and that BACK2Y, his annual conference, has become, well, a little bit “holier than thou”.

I interviewed Paul the other day and asked him to explain his belief in life planning and why he thinks so many UK advisers object to what, in essence, is a jolly good idea. It’s fascinating stuff, so please read it through to the end, where you’ll also find details of how you can hear Paul speak at this year’s Inside ETFs — Europe’s largest ETF event — as a VIP guest of the organisers.

You’ve just had another very successful BACK2Y conference in Birmingham. For those who don’t know about BACK2Y, what is it?

Your company, Inspiring Advisers, is not just for UK advisers. You work with advisers all over Europe and beyond, don’t you?

Yes, Inspiring Advisers is a growing community of advisers and planners from all over the world. It’s for advisers who realise there’s a need to change, to start moving the value away from the investment piece, which is being increasingly commoditised, towards the things that really matter — exploring with clients what they’re trying to achieve, and then helping them to achieve it through financial planning. So I teach advisers through my training programme how to do this well, ideally so that every client they take on, and keep going forward, is profitable, because you deliver fantastic client outcomes. The investment piece then becomes the engine, quite simply, to drive the financial plan, rather than being the focus. 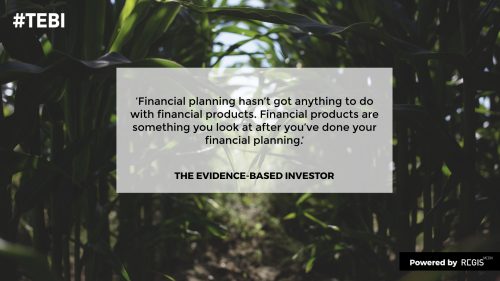 I’m a fan of Inspiring Advisers and BACK2Y, but you’ve managed to get a few people’s backs up as well, which is no bad thing. Why do you think there are some advisers who seem to be so opposed to lifestyle financial planning?

I don’t know. I think some advisers are possibly a little bit insecure about the idea of having a conversation with the client that’s a little bit deeper than how their investments have done, whether they’ve gone up or gone down and whether they need to change anything. That’s a fairly shallow form of relationship with the client.

Not every adviser wants to be in a situation where you’re trying to find out from the client what it is they want to achieve, trying to find out the client’s story, because I think they’re afraid of where that might lead. A lot of advisers are still in the world of product focus. That’s what they’ve always done. They’ve had 30 years of brainwashing. It’s been in the interests of the financial industry to keep advisers focused on financial products, and distributing financial products, because that’s how the industry makes its money.

In the old days that worked really well, because the industry was paying commission to get their stuff sold. But now, certainly in the UK since RDR, the industry’s not paying advisers any more. The client’s paying the adviser. It therefore seems logical to me that it should revolve around the client and not helping the industry sell its stuff. I think some advisers are a little bit slow to catch on to this, and they could well end up being dinosaurs if they don’t wake up soon.

You’re one of the keynote speakers at Inside ETFs Europe later this month. What are you going to be speaking about?

I’ll be talking about how to move the focus away from the investment piece, so that the products become, if you like, just the tools in the bag to get the job done. Keep it simple, keep it low-cost, keep it as efficient as possible and let that drive the financial plan. The plan is where the value is.

There are a number of things that are coming together, which I think could cause issues for advisers going forward — particularly ones who have created a service proposition that revolves around an investment focus.

A lot of advisers have moved to a low-cost passive approach, which is great, because it cuts out investment costs. Clients can very easily see why that makes sense. But if that adviser is charging, say, 1% a year for on-going advice, arguably that adviser becomes the most expensive piece in the distribution chain. Two things have happened; one, a passive approach is not a USP any more, or at least not as much as it used to be, because so many advisers are doing that; and two, they’re now sticking out like a sore thumb because their advice is expensive.

Other advisers are hiding behind performance. If the markets are going up, that’s great, but what happens when the inevitable fall comes?

So we’ve got a potential bear market, we’ve got increased FCA scrutiny on fees, we’ve got consumers being more aware of the cost of things, and we’ve got the potential threats of robo-advice and Vanguard. If Vanguard do in the UK what they’ve done in the US, with a 30-bips model, including access to a certified financial planner, and you’ve got some advisers charging three, four, five or ten times that, then the question is going to be, What am I paying for here?

So we’ve got all these things coming together. It’s a potential perfect storm. 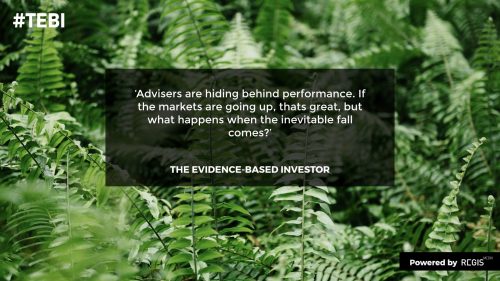 How do you see this playing out over the next 10 or 20 years? Will we see advice firms who continue to base their value proposition on the investment piece go under?

I think there could be a decline in revenues — that’s my gut feeling. We have an ageing adviser market and an ageing client base, and a younger potential client base who might realise they can do this themselves. That’s going to cause a squeeze and possibly a drop in assets under management. And there’s this awareness that the £10,000 or £20,000 that advisers receive each year, just for the investment piece, is just not worth it.

The only thing that’s worth that sort of money is when you change a client’s life by helping them realise what they need to do to get what they’ve been working so hard for. Will those firms go broke? I don’t know. But I think it will become increasingly difficult for them.

Hurry — we have a limited number of complimentary VIP passes to give away for Inside ETFs Europe, at which Paul Armson is a keynote speaker.

This year’s event is being staged at Hilton Park Lane from 23rd to 25th October.

Ember Regis Group, which produces The Evidence-Based Investor, is one of the sponsors. As such, we have a number of complimentary VIP passes to give away.

I’m going to be there myself, and if you’d like to come too, you simply have to register here using the VIP code REGIS at checkout.

The Evidence-Based Investor is produced by Regis Media, a boutique provider of high-qaulity content and social media management to financial advice firms around the world. For more information, visit our website and YouTube channel, or email Sam Willet or Christina Waider.

A diverse portfolio is a strong portfolio

By CRAIG LAZZARA   We can think of an active equity portfolio as a combination of a benchmark (the...

How can we explain momentum returns?

By LARRY SWEDROE   Momentum, the tendency of past winner stocks to outperform past loser stocks over...

Four lessons from an investing pioneer